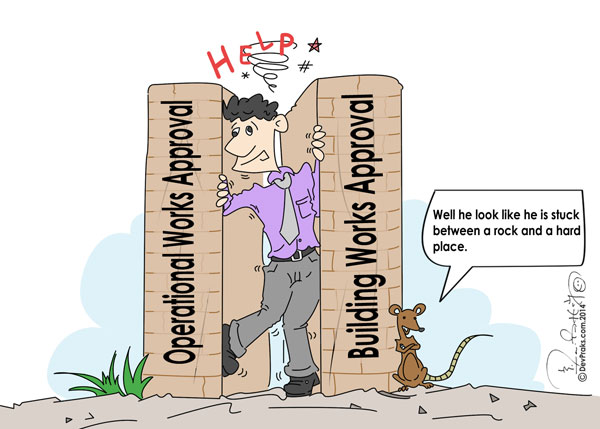 Now you would think that putting up a retaining wall would be a relatively easy process. However, this is not always the case, speak to your building certifier first.

While it is commonly known that all retaining walls must be structurally designed by a Registered Professional Engineer of Queensland, builders and landowners often get tangled in red tape when they try to apply for the correct and relevant approval. Retaining walls fall into two categories:

1. Those used to develop land or make changes to the land levels, and

However there are two types of approval that you might have to obtain depending on the objectives of your wall: operational works approval and building works approval, and determining which is required for your wall is not always straight forward.

Simple retaining walls that are used to just make changes to land levels, usually only require an operational works approval from the local government. Depending of course, on how high they are to be. If the retaining wall is for cutting and / or filling the land, this can be a very contentious issue and there are normally strict provisions in the planning scheme to control such procedures. Most planning schemes will require an operational works approval to be obtained from council before any work commences.

On occasions, it is difficult to separate the two types of retaining walls as they might share similar functions and it may be necessary to obtain both an operational works approval and a building works approval. To be sure what approvals you might need, you really must discuss the objectives of your wall with your building certifier so you can be sure you are following the right procedure. Otherwise, you might just end up between a rock and a hard place – and no one has time for that.

Recent Articles
Enquiries
We want to be part of the solution. Send us your enquiry and we will get back to you.
Go to Top